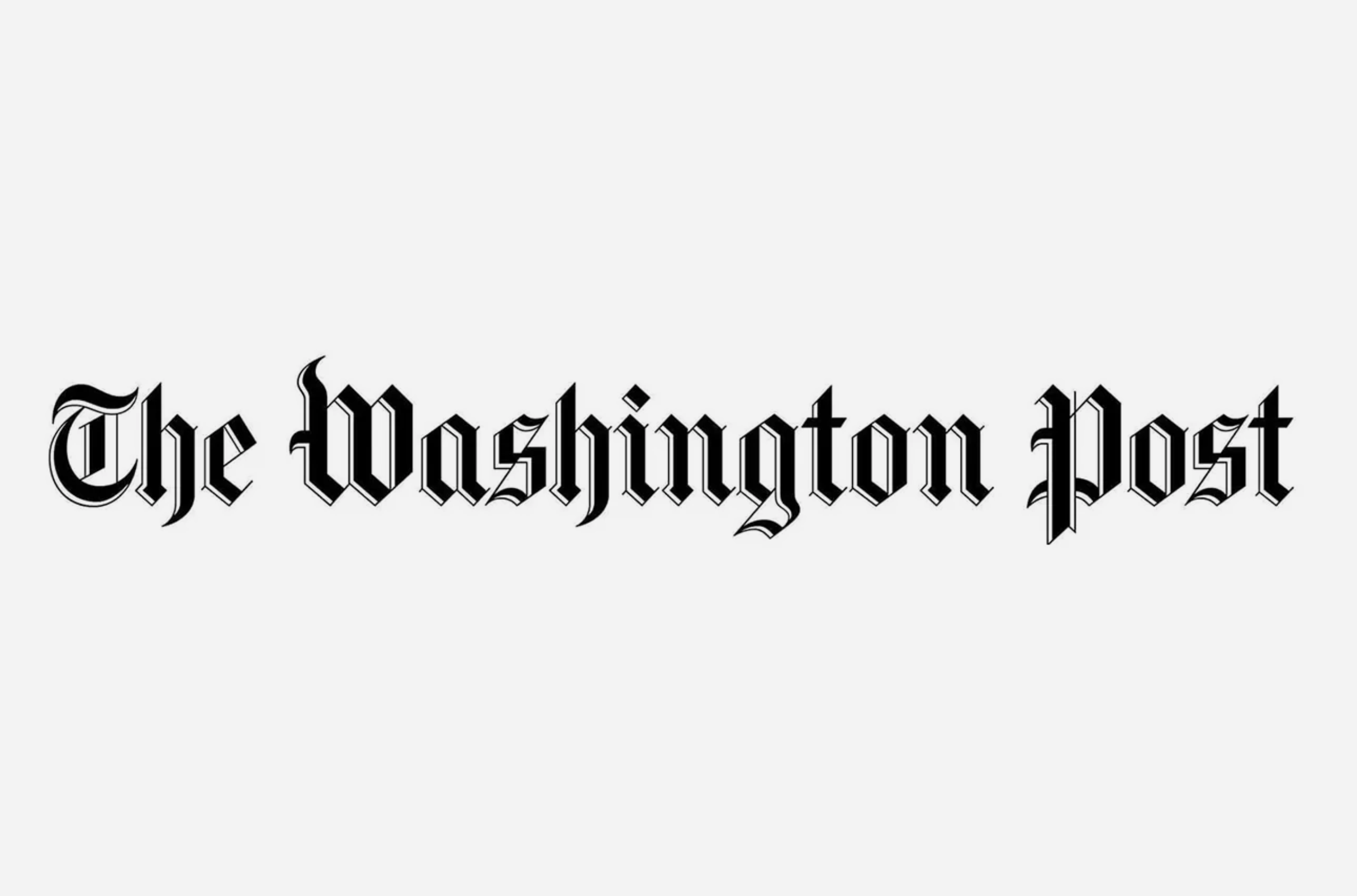 In early March, we opened the doors to our newest location, Boqueria Penn Quarter at 777 9th Street NW. Within the first month of opening, we were excited to note that Tom Sietsema from the Washington Post popped in for a visit (or three). What Tom discovered? That we know how to throw a great party! (Thanks for noticing, Tom!) 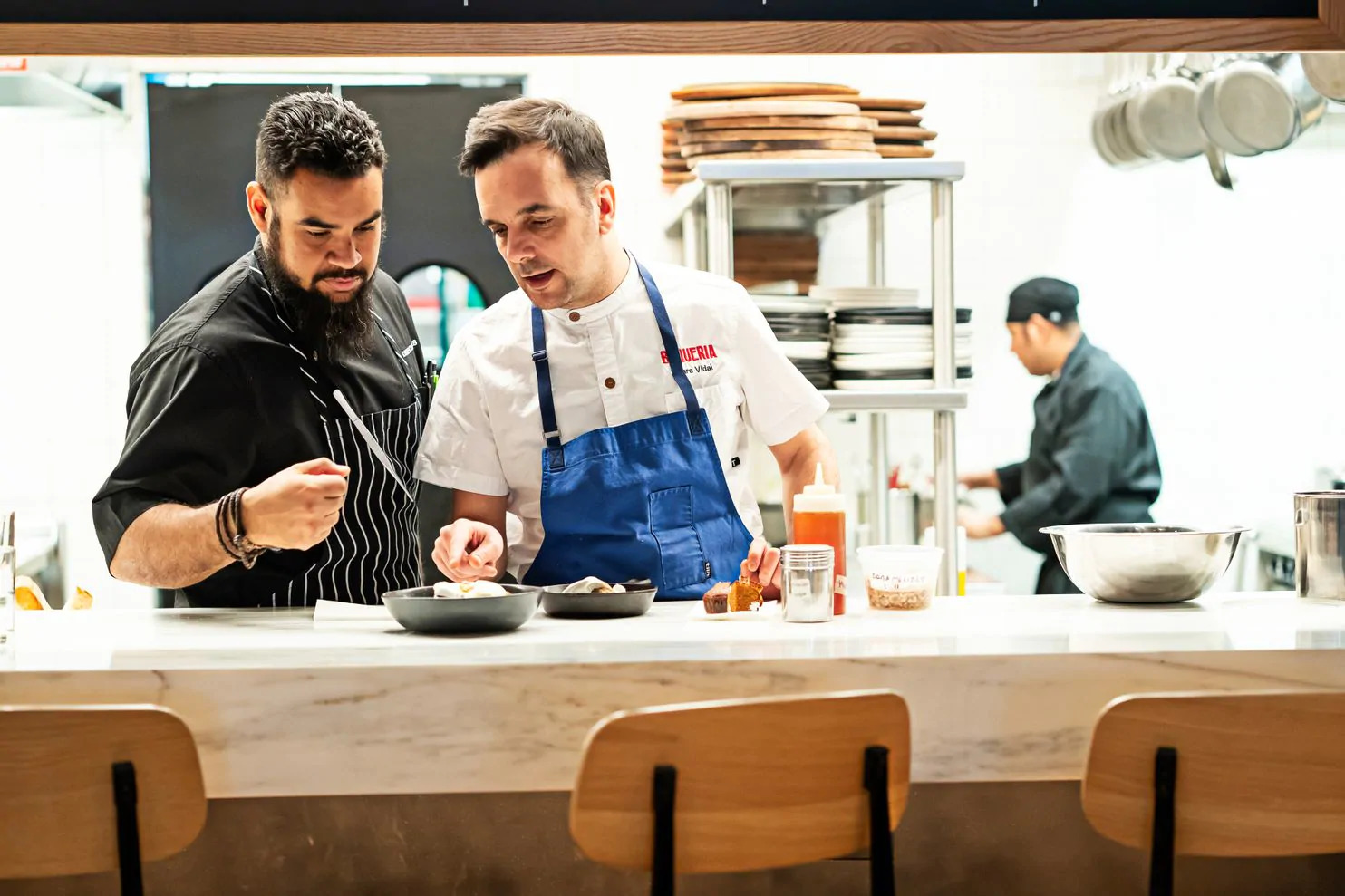 “Plates come out at a pace that suggests the kitchen is eavesdropping on your appetite. Early on, you realize you’re in good hands with Vidal, chef de cuisine George Rodrigues …and the rest of the crew.”
…go to the full article

Chef Marc and Chef George at the helm of the open kitchen, behind a 12-seat marble dining counter, can see the entire restaurant – and that’s just how they like it. This view tells them everything they need to know – the mood of the room, the pace of the diner’s appetites, the energetic buzz at the bar, the line of hungry guests at the host stand – and they respond with acuity as they call out tickets to the crew behind them while simultaneously putting the finishing touches on dishes and handing them off to servers eagerly awaiting them at the pass.

What piqued his interest… 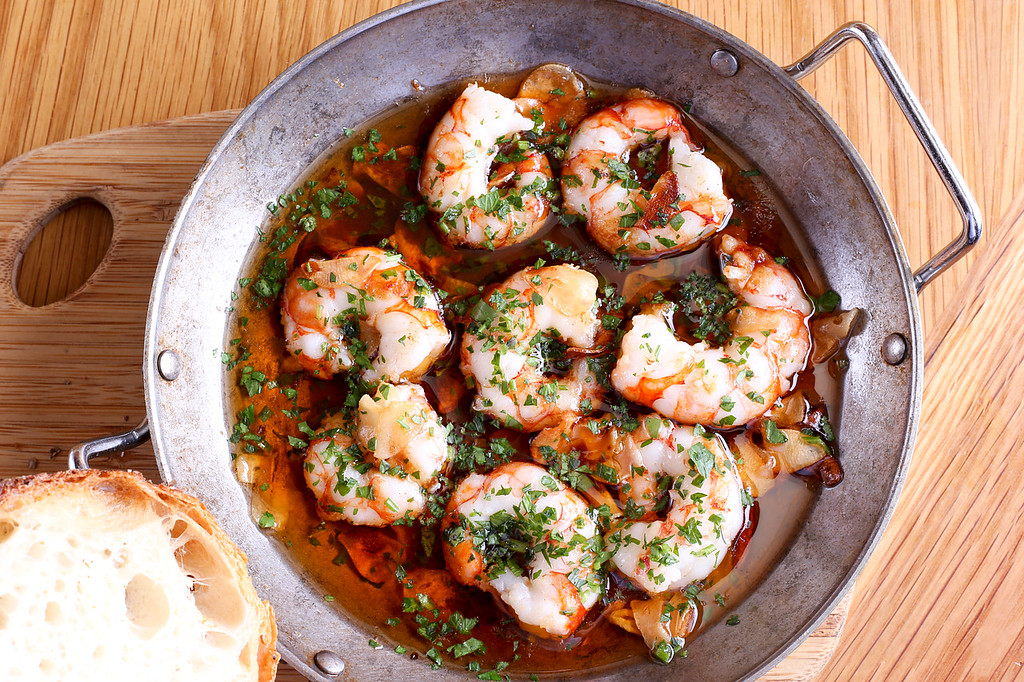 “Definitely, we want some sautéed shrimp, which leave a trail of garlic and lemon in their wake.”
…go to the full article

As you should, Tom! In this irresistible tapas bar classic, fresh shrimp cook almost instantly in piping hot olive oil laced with chilies and loads of sliced garlic. Chef Marc adds a shot of brandy for an even deeper flavor and a hint of sweetness. When the small cast iron skillet hits the table it is still bubbling and steaming, releasing the wildly enticing aroma of caramelized garlic and briny shrimp. 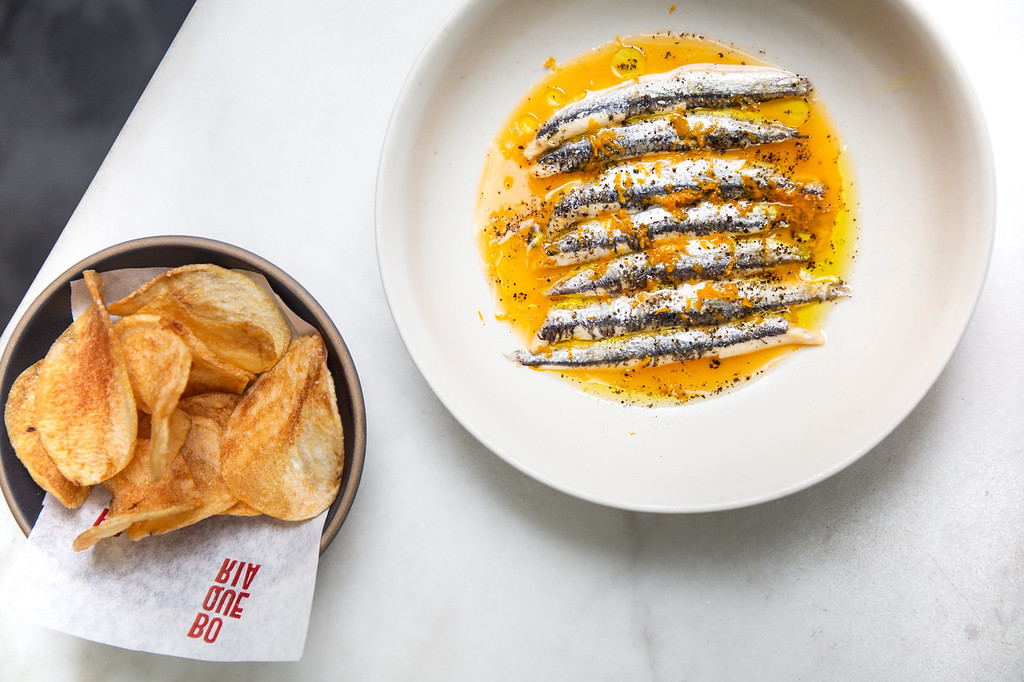 “The potato chips accompanying the silvery anchovies, freckled with orange zest, call to me, too.” …go to the full article

Our favorite anchovies come from Cantabria, a region along Spain’s northern coast. It fronts the Bay of Biscay, a gulf of strong currents and waves that make the silvery fish especially fatty. Chef lays them in a bowl with high-quality Spanish olive oil, bright citrus juice to cut through the fat, a sprinkling of freshly ground pepper to heighten the flavor, and house-made potato chips for a satisfying crunch.

The star of the show? 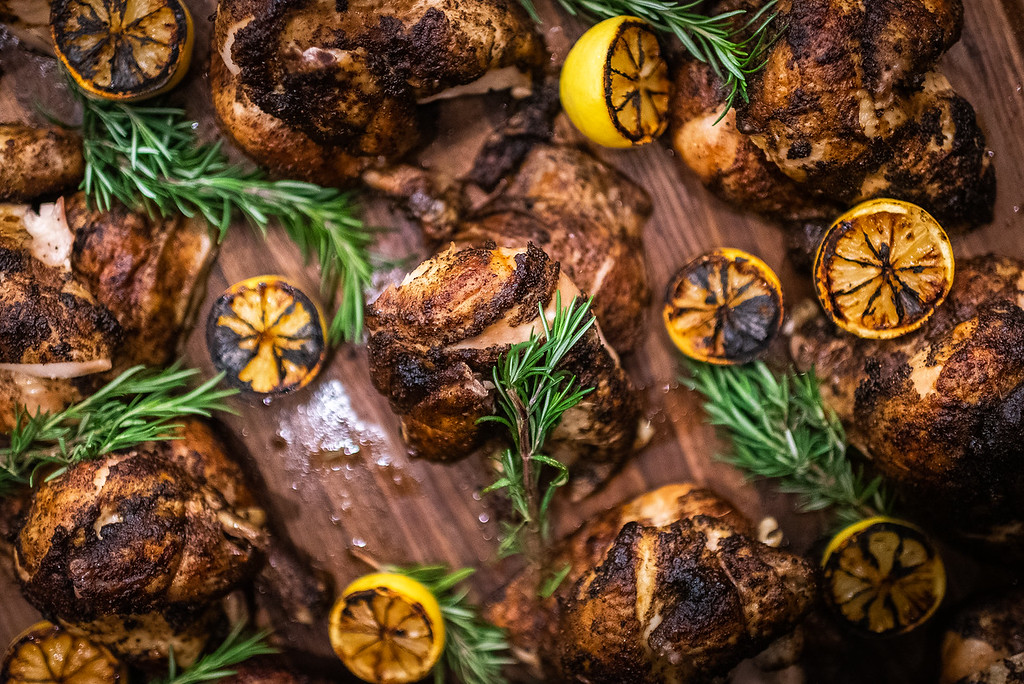 “The freshly minted Boqueria has an advantage over its sibling in the form of a rotisserie, which turns out to be the source of one of the restaurant’s most enticing dishes: roasted organic chicken. Vidal calls it his choice dish, because it reminds the Barcelona native of ‘the way we eat in Spain.’…Thanks for the memories, chef.” …go to the full article

Chef Marc’s Catalan style roasted chicken is both a recipe and a way of eating. Originally inspired by a dinner his grandmother would make on Sundays when the family’s Barcelona-based restaurant was closed. Chef Marc channels those memories by generously seasoning chicken with salt and pepper, brining the bird overnight, slowly turning it on the rotisserie and frequently basting it with lard. The result is incredibly moist meat with crackling skin that is perfectly golden brown.

Chef Marc knows his way around the sea 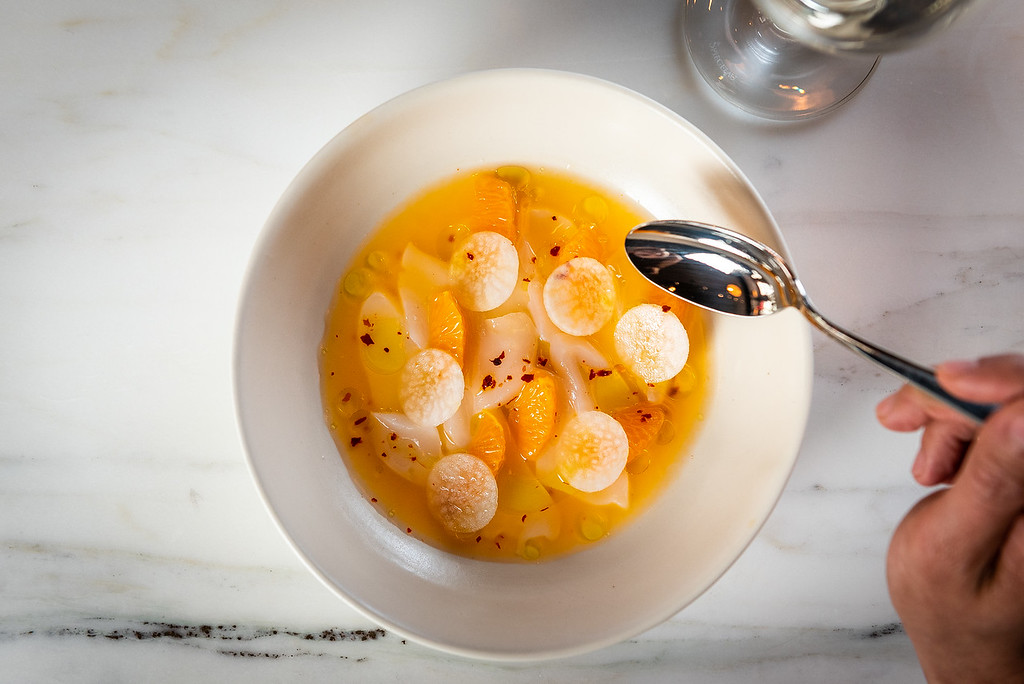 “They know how to treat fish and seafood. A crudo is a crudo is a crudo, but Vidal improves on the expected with coins of raw scallops that practically melt on the tongue, and same-size slices of turnip in the arrangement.” …go to the full article

A Crudo graces our menu most months of the year. In the winter, fluke gets a light salt cure and a sprinkling of Pipirrana – the Andalusian salad of diced bell peppers, tomatoes, and onions – a drizzle of lemon juice, and olive oil.

In the spring the delicate fish gets a hit of bright citrus juice and shares the plate with verdant green and yellow wax beans, fragrant basil, and crunchy Marcona almonds. 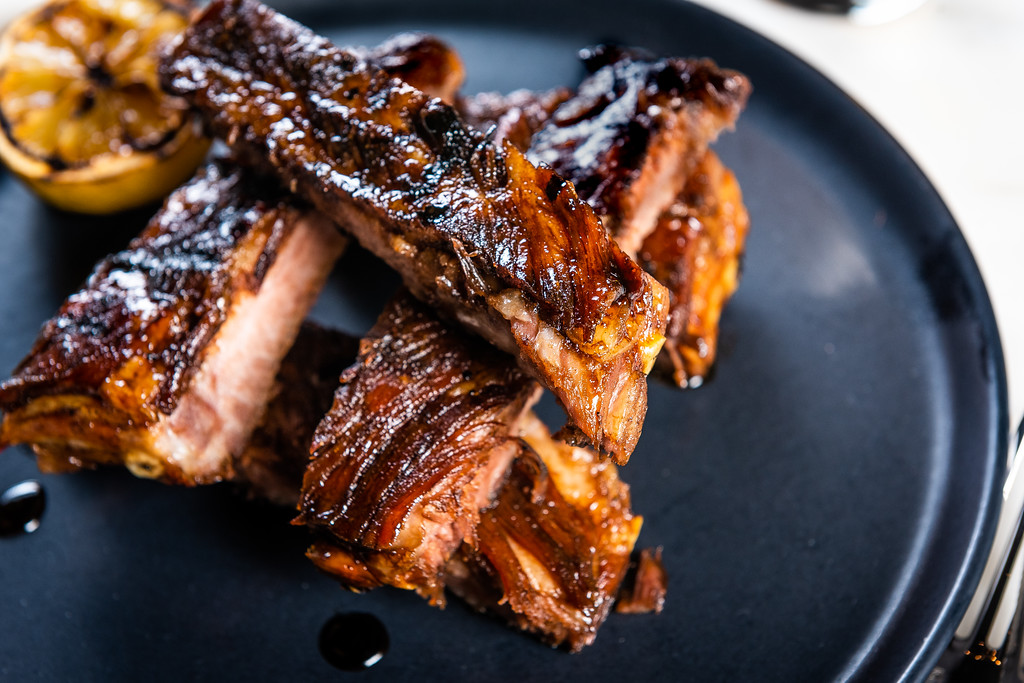 Tom may have noticed our love (one shared throughout Spain) of all things pork:

“With three days’ notice and for a minimum of six people, Boqueria will prepare a suckling pig. The closest I’ve come so far is to order some pork ribs and strip the abundant meat from their bones. Half the pleasure is licking the glaze from your lips. The taste of dates and figs, cocoa and licorice, are hallmarks of the Pedro Ximenez sherry used to sauce the ribs, which, like the chicken, benefit from a spin on the rotisserie.” …go to the full article

The aforementioned ribs, Costillas de Matanza, are a new addition to Chef Marc’s repertoire. Succulent pork ribs are cured overnight in a mixture of salt, black pepper, sugar, crumbled dry bay leaves, ground cinnamon and a sprinkling of sherry vinegar. After a generous coating of pork fat and a 3-hour roast, the ribs are glazed in a reduction of Pedro Ximenez – an intensely sweet dark sherry – that brings out the natural sweetness of the pork. 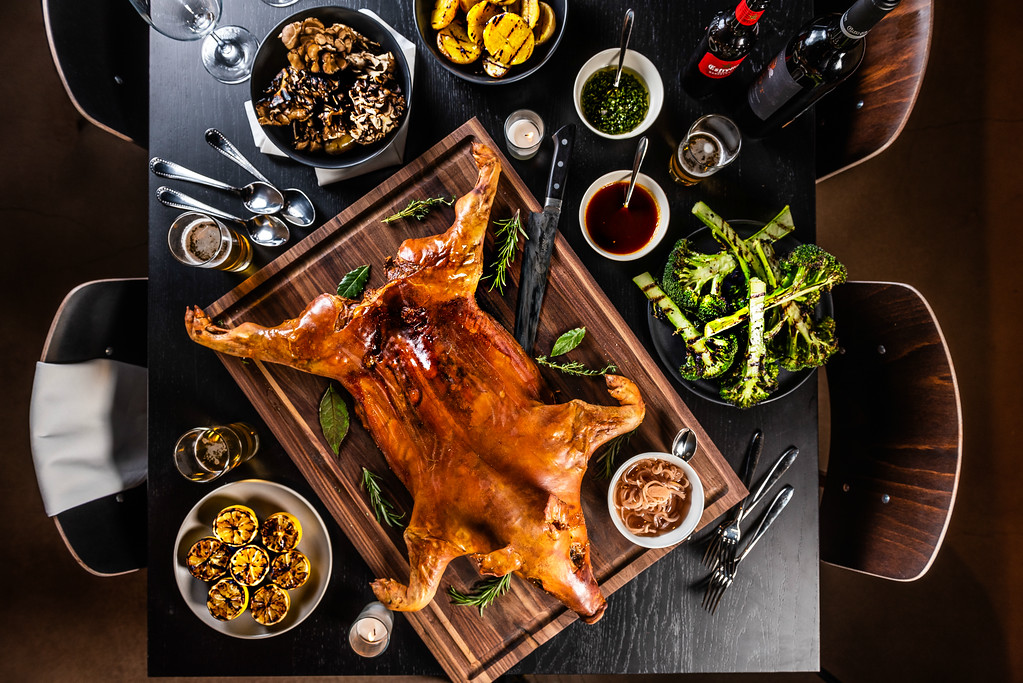 Did that suckling pig feast catch your ears?
For groups of 6 or more, Chef Marc serves a Cochinillo feast that begins with a selection of artisanal cheese and charcuterie, follows with a whole slow-roasted suckling pig and seasonal roasted vegetables accompanied by pickled onions, pimentón butter, and salsa verde.

To make a reservation for a group of 6 or more, email [email protected]

Ending on a sweet note 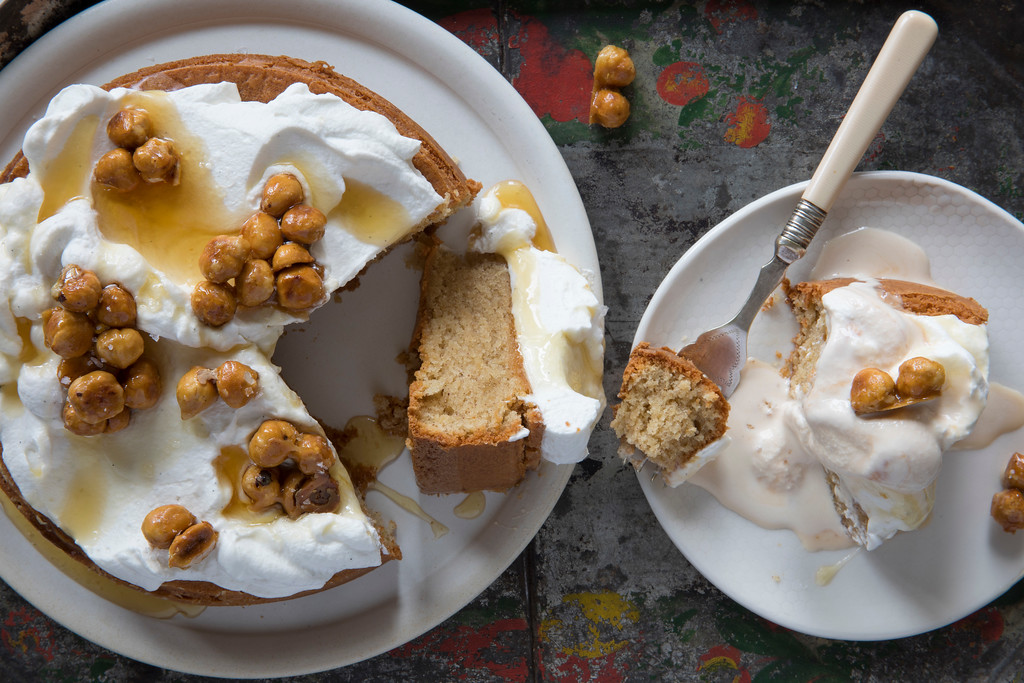 “Boqueria reminds us that not all churros are cut from the same dough. The kitchen makes several types, the most dangerous being the most delicious. Stubby, sugar-dusted Los Rellenos churros gathered in a hot bouquet keep your choice of dip inside the fried dough, which means every bite results in projectile dulce de leche or Nutella — on your chin, on your plate, on the table (guess I’m headed to the dry cleaners tomorrow). What a mess — but what a hoot. Another dessert with mass appeal, Torta Turron, crowds pieces of almond-hazelnut cake, honey-laced dulce de leche ice cream and tufts of whipped cream in a bowl that’s best shared.” …go to the full article

The latter of Tom’s mentions is a dish close to any Barcelonian’s heart; turron. Chef Marc has transformed Spain’s iconic nut-studded honey nougat Christmas candy flavors into a tender, buttery, almond-hazelnut cake topped with freshly whipped vanilla cream, candied hazelnuts, a drizzle of honey and a final sprinkle of sea salt to perfectly balance the sweetness.