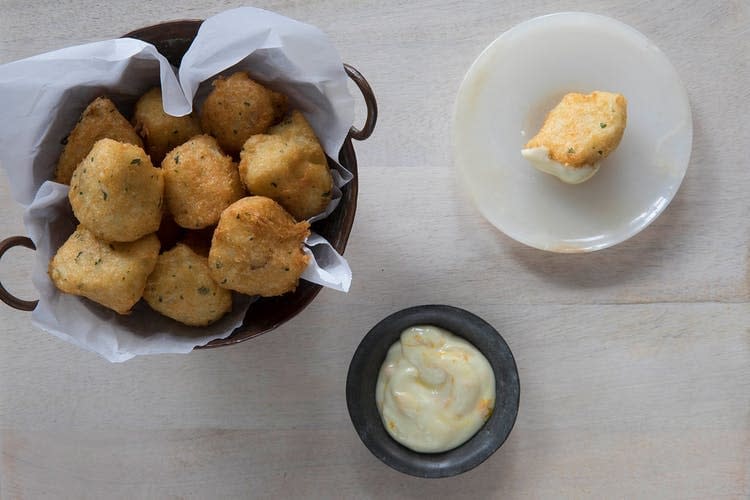 These crispy bites are your one-way ticket to Spain.

Visit San Sebastián and alongside jars of vinegary guindilla peppers and ropes of chorizo, you’ll find planks of dried salt cod, or bacalao. It’s in this Basque city where this staple Spanish ingredient is turned into crispy, savory fritters—a mainstay at the NYC restaurant, Boqueria, and a new cookbook of the same name. If bacalao isn’t available in a specialty store in your area, you can also order the dried fish online.

Excerpted from Boqueria: A Cookbook, from Barcelona to New York

For the Citrus Mayonnaise:

Gradually raise the speed to medium and add the oil in a slow, steady stream through the feed tube. As soon as the mixture is thickened and smooth, turn off the blender (over-blending can cause the mayonnaise to split).

Place the bacalao in a deep dish and cover with cold water. Cover the dish with plastic wrap and refrigerate for 36 hours, changing the water three times in the process. Drain well and cut a small piece to taste. It should taste like salted fish, but not excessively salty. If it does, cover with cold water and soak for another 6—12 hours, tasting after 6 hours to test for readiness. Drain well and cut into 1½-inch chunks. Remove and discard any bones.

Place the potatoes in a large saucepan and add enough cold water to cover by 2 inches. Bring to a boil over high heat, then boil until a cake tester or thin-bladed knife slides through easily, about 10 minutes. Avoid overcooking them; if they are soft they’ll become watery. Drain well.

While the potatoes are boiling, place the bacalao in another saucepan and add enough cold water to cover by 1 inch. Bring to a boil over medium-high heat. When the water comes to a rolling boil, remove from the heat. Set a strainer over a large liquid measuring cup or a bowl and pour the bacalao into this. Reserve the drained bacalao and ⅔ cup of its cooking water. Discard the remaining cooking water.

Combine the oil and garlic in a large clean saucepan. Set over medium heat and cook, stirring occasionally, until the garlic is fragrant and just turning golden, about 4 minutes. Immediately add the flour and cook, stirring continuously, until the mixture is smooth and bubbling, about 1 minute. While stirring, pour in half of the bacalao water in a steady stream. Stir until smooth, then add the remaining water in the same manner. Stir in the parsley and remove from the heat.

Transfer the mixture to the bowl of a stand mixer fitted with the paddle attachment, along with the drained bacalao and potatoes. Beat on low speed until well mixed and slightly cooled, about 1 minute. Scrape the sides of the bowl. With the mixer on low speed, add the eggs one at a time, waiting for the first to be fully absorbed before adding the second and scraping the bowl occasionally. As soon as the eggs are fully incorporated, stop mixing. You want the mixture to include some chunks of potato and cod. Press a piece of plastic wrap directly against the surface of the mixture and refrigerate until cold, at least 3 hours. It will keep in an airtight container for up to 3 days.

Line a wire rack with paper towels. Fill a large saucepan with oil to a depth of 3 inches. Heat over medium-high heat until it registers 375°F on a deep-fry thermometer. Scoop up one heaped tablespoon of the bacalao mixture. Use another spoon to press and scrape the mixture against the first spoon to form an oval shape. Press and scrape the mixture once more, this time carefully dropping it into the hot oil. Repeat with more of the bacalao mixture until the buñuelosform a single layer in the saucepan without crowding. Fry, turning gently, until puffed and evenly golden brown, 1–2 minutes. Use a slotted spoon to transfer the buñuelos to the paper towels to drain. Let the oil heat up again and repeat with the remaining bacalao mixture, working in batches as necessary.

Serve the buñuelos hot or warm with the mayonnaise for dipping.

We use cookies to ensure that we give you the best experience on our website. If you continue to use this site we will assume that you are happy with it.OkDecline