Here on the North American east coast, it’s not uncommon for the verdant leaves of summer oaks to fall without notice late in the year—for the “I NY” towels of lounging tourists dotting Central Park to fade into blankets of freshly fallen snow over the course of a long weekend, leaving us scrambling to unpack our winter wardrobes and wondering if Autumn has up and abandoned us altogether.

But as we come to terms with our city’s seasonal identity crisis, halfway across the world the first day of October punctuates a much more precise time of year – known as la montenara—this is the season where fat acorns fall from encina oak trees, and the legendary black Iberian pigs roam freely, spending the last three months of their lives feasting amongst the wet leaves.

These free-range grazing fields are known as the Dehesa, a natural pastureland scattered throughout the central and southwestern regions of the Iberian Peninsula, as well as parts of Andalucía—and it is in these Dehesas where Iberian pigs thrive.

To be labelled as true Jamón Ibérico, each ham must receive a certification from Denominación de Origen (DO), a regulatory department that inspects these pigs up to eight times throughout their lives to ensure quality and distinction. 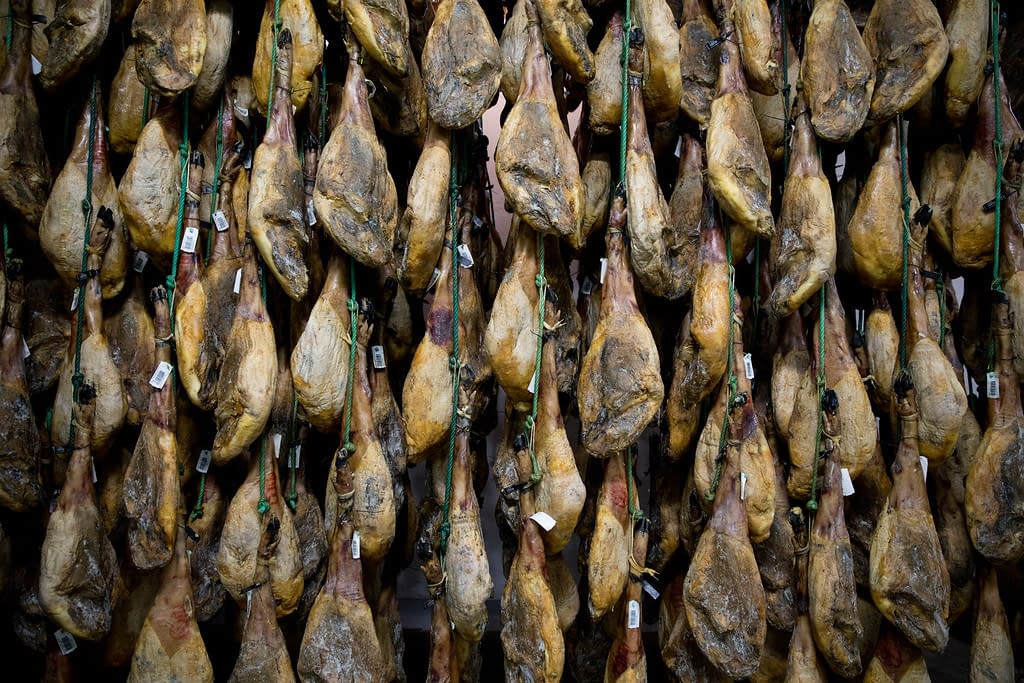 The highest classification, Ibérico Bellota, must be 100% Iberian pigs and enjoy a full diet of acorns during the Montenara season. Jamón Ibérico Cebo de Campo comes from free-range Iberian pigs consisting on a diet of acorns and grains including barley and maize; and the less expensive Jamón Ibérico Cebo are farm-raised on a diet of grains and feed.

These stunning jamóns (the back legs of the pig) are dry-cured and aged for between two and four years before producing the sweet, nutty, melt-in-your-mouth slices of Jamón Ibérico that we know and love.

One of Spain’s other most renowned porcine exports, the far more familiar Jamón Serrano, can be spotted on essentially every menu across the country, hanging in market windows like tapestries and adorning tapas tables in every family kitchen.

This classic delicacy is made from the hind legs of Spanish white pigs, either farm-raised or free-range and fed on a grain-rich diet. Unlike Jamón Ibérico, which can only receive true classification in regions where the Dehesa lands are found—Serrano is not bound by geographical distinction, making it easier to produce and export on a mass scale.

Jamón Serrano takes its name from Spanish ‘sierra’ or Catalan “serra” – meaning mountain or mountain range, respectively – as these hams were historically hung high up in mountainous climates that offered dry summers, crisp autumns, and cold winters: favorable conditions that allowed for gradual aging of the meat.

Traditionally, the production of Jamón Serrano employed a simple, three-pronged approach to the curing process: salting, hanging, and time. While Jamón Serranos are now aged, for the most part, in human-controlled environments, they are still cured using sea salt and held for 6-18 months in conditions that mimic their mountainous origins, where the climatically stable days of autumn marked the end of the curing season.

Back on the east coast, as we find ourselves straddling the line between summer and winter, with sunburns on our backs and a cold flush on our cheeks – you’ll most likely find us tucking into a stunningly simple plate of Croquetas de Jamón Ibérico, raising a farewell toast to yesterday’s late-summer produce and snuggling in to the spectacularly fall-forward nuttiness of Jamón.

We’ll pause every few minutes to sip on our third glass of Sangría, and wash it down with the radical notion that it might just be worth it to let autumn have its moment: however fleeting it may be.