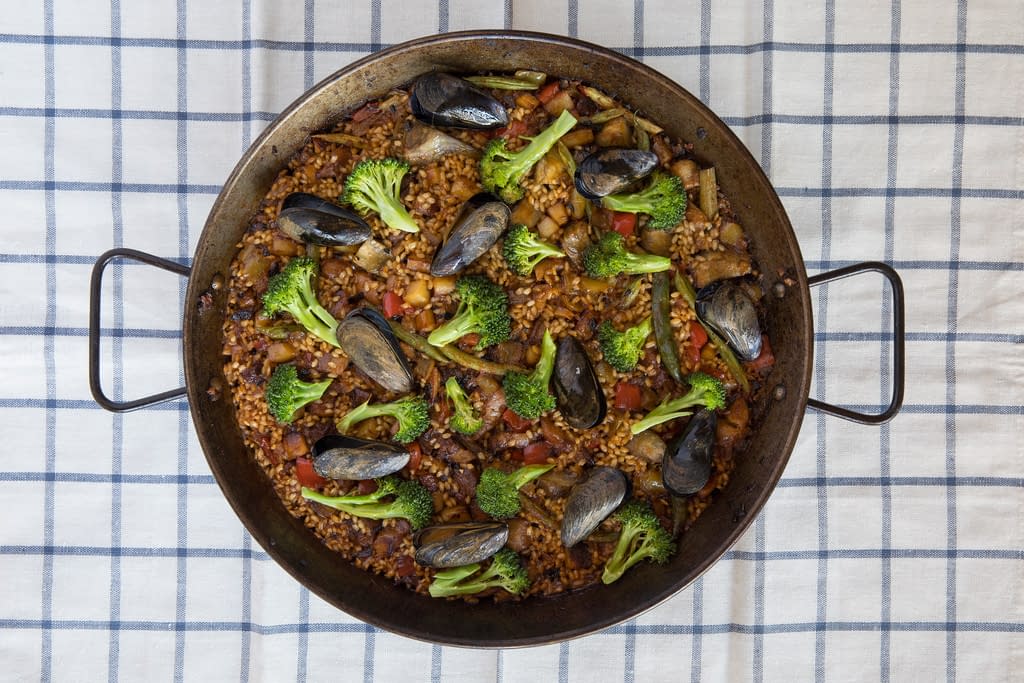 This “mixta” style of paella — cooking both meat and seafood into rice — is what most people outside of Spain know and love because it’s delicious, homey, and incredibly satisfying. Below is a winning combination that we created after a trip to our local market. Stick to it or swap in similar ingredients; that’s the spirit of “mixta.” It’s not just that cooks everywhere have their own versions, but they have different versions every time they make it based on whatever looks good at the market.

Bring the chicken stock to a boil in a large saucepan. Reduce the heat to keep

just warm until ready to use.

Add the hot chicken stock. Bring to a boil over high heat and season to taste with salt. Sprinkle the rice evenly in the pan. Stir it a little to make sure it’s evenly distributed and submerged in the liquid, but then don’t touch it again. You don’t want to activate the starches and make the mixture creamy like a risotto. You want the grains to cook separately from each other. Scatter the broccoli on top. Bring to a boil over high heat and boil vigorously for 5 minutes.

Simmer until the rice is al dente, about 10 minutes. Tuck the mussels into the rice. Drizzle the remaining tablespoon oil over the rice and raise the heat to high. Cook until all of the liquid evaporates and the rice forms the soccarat crust on the bottom of the pan, about 5 minutes. Remove from the heat and cover with a clean kitchen towel. Let rest for about 5 minutes. Uncover and serve directly from the pan, discarding any mussels that haven’t opened