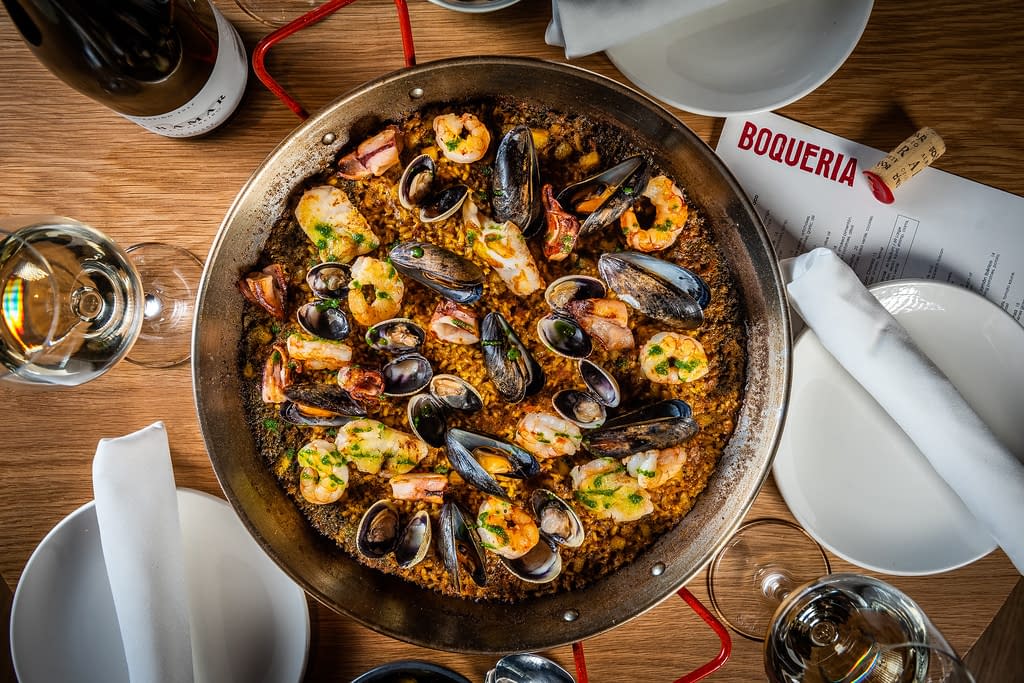 No Spanish dish captures the imagination more than paella. If you are not from Spain, everything about the dish feels exotic: the wide, shallow pan; the saffron-laced rice; the head-on shrimp, clams, and mussels. But to a Spaniard, it’s comfort food—a communal dish to be shared at family gatherings. Although the dish has its roots in Valencia, where natural wetlands were first converted to rice paddies in the eighth century, variations on the classic paella and other rice dishes cooked using the same technique are as diverse as Spaniards themselves.

Mountainous regions give us rice dishes built with foraged mushrooms and wild game, while seaside towns might mix in squid ink for a black rice rich with salty sea flavor. Along the Catalan coast, where tradesmen arrived long ago with pasta-making traditions from Italy, small fideo noodles often stand in for rice in a paella, a regional favorite known as fideuà.

Paella’s origin story began over a thousand years ago, when the Romans first set up a rudimentary system of irrigation in the wetlands of Valencia. Three hundred years later, the Moors refined the system and introduced rice. Since then, Valencia’s marshlands have supplied the country with the grain. And just as rice spread from its Valencian home, so did paella, eventually becoming the national dish. And as with all of the country’s most popular dishes, a heated debate persists about paella.

Engaged couples have even been known to fight over which of Spain’s two principal types of rice to throw at their wedding. Bomba or calasparra? Yes, the great paella dispute can leave Spaniards simmering. But the grain of truth revealed by this ongoing debate is that everyone feels extremely passionate about paella. That includes us.

At Boqueria, we recommend one of our paellas to almost every table. Crackling top and bottom, succulent goodness in the center: that’s our seafood paella. We do it Catalan-style, adding both sofrito and picada for a more robust flavor. The former brings the earthy sweetness of caramelized tomatoes, onions, and garlic; the latter delivers the fresh bite of parsley in a saffron-scented olive oil. Lobster stock deepens the from-the-sea juiciness of cuttlefish, squid, mussels, clams, and cod. A meal that starts with a few tapas and ends with a big satisfying pan of paella is hard to beat.

Here are recipes for our 3 favorite Paella. We hope cooking them will bring the Boqueria experience to life in your own home.