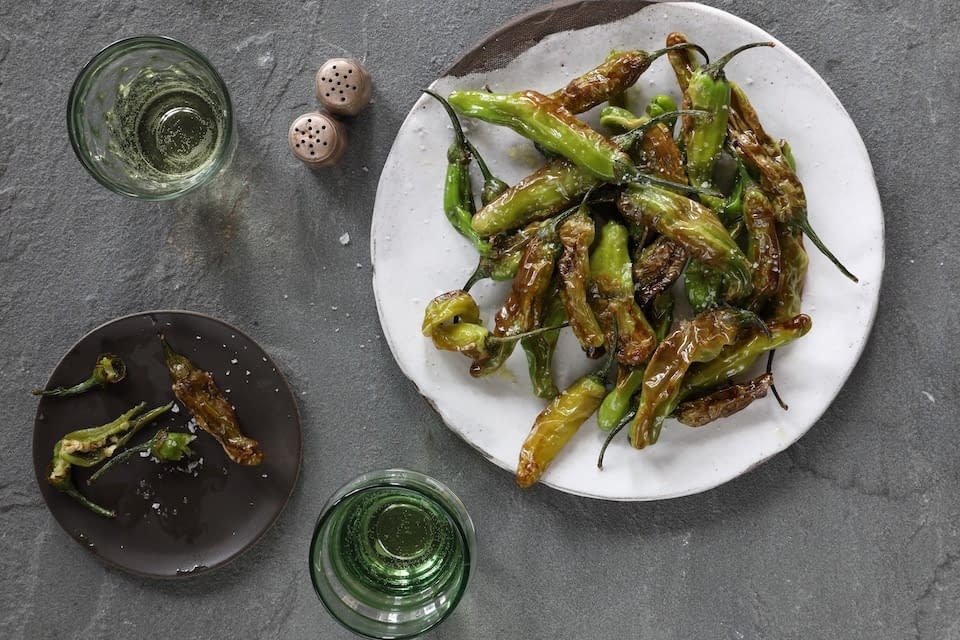 “Be careful. About one in seven is really spicy.” Our servers and food runners repeat this phrase whenever they place this dish on a table at our New York and Washington DC restaurants. For some guests, it’s a warning. For others, a challenge. The little game of Spanish roulette is fun, and the combination of peppers, salt, and oil is effortlessly delicious. This Spanish staple is a tapas bar favorite. Perfectly paired with a crisp Albariño or effervescent glass of cava they can be casually noshed, shared with friends, or greedily (and understandably) kept to oneself.

The Spanish peppers from the Galician village of Padrón tend to be mild and almost fruity with fiery exceptions. If you can’t find Padrones, Japanese shishito peppers taste very similar and are readily available here. Whichever variety we have on hand, we sizzle them in olive oil, then coat them with fine salt so they’re evenly seasoned. For a hit of crunch, we finish the dish with a flurry of flaky salt.

In the summer months, when Padrón peppers can be found in abundance at the Union Square Greenmarket and DC’s FreshFarm markets, we love to throw these peppers on the grill. The skins blister at the touch of the flames and a particularly transporting aroma and taste are produced. These addictive snacks are perfect for summer barbeques or for making our famed, tequila steeped, Shishito Pepper Margarita!

Line a large plate or wire rack with paper towels. Fill a large skillet with oil to a depth of 1⁄4 inch. Heat over high heat until smoking. If you touch a pepper to the oil, it should sizzle immediately; if it doesn’t, let the oil heat more.

Add all of the peppers in a single layer. Cook, continuously turning with tongs, until the skin blisters, becoming a paler green with dark charred spots, 2–5 minutes. Smaller peppers will be ready first, so remove them as they’re done. Transfer to the paper towels to drain.

If you are cooking via an outdoor grill, lightly toss the peppers in a bowl with high quality Spanish olive oil. This will impart the flavor you find at our restaurants. Add the peppers to a grill basket and place directly over the flames of a pre-heated grill. Toss the peppers occasionally and grill until the skin is lightly blistered on all sides, about 3 to 5 minutes.

Whether frying or grilling, transfer the peppers onto the towels to remove excess oil. Transfer to a serving plate and sprinkle with fine and flaky salts.