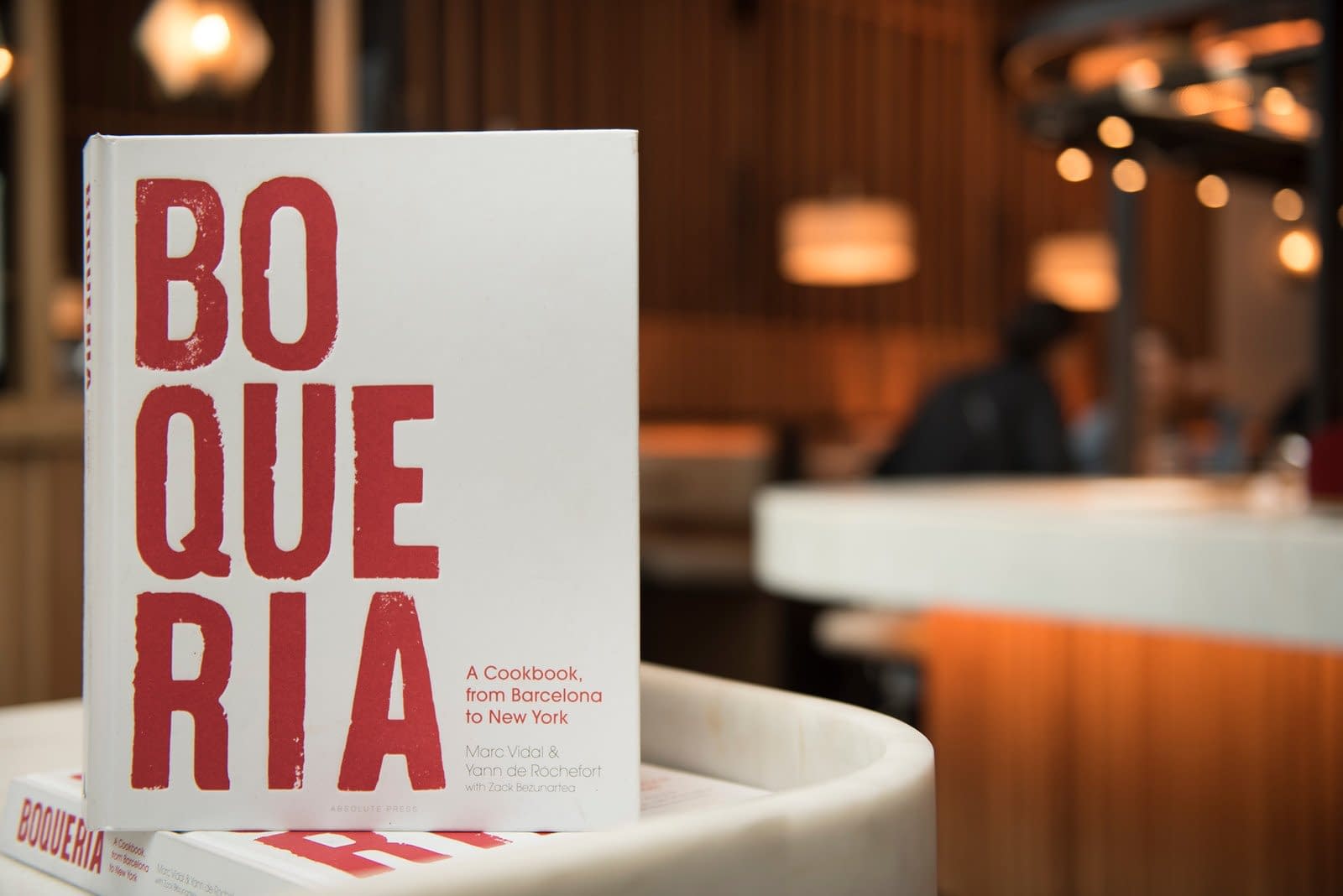 Excerpt from “Boqueria: A Cookbook from Barcelona to New York”

It’s 6:30 pm on a Thursday at Boqueria 19th Street, and the relentless buzz of the kitchen printer signals the beginning of the dinner rush. A string of tickets inches over the back of the old ink-jet printer and snakes its way across the worn butcher’s block where plates are staged and garnished before being sent to the tables.

Chef Marc turns toward Oaxaco, who, just as he has every day for the last ten years, stands behind him at a small table preparing potatoes for patatas bravas. His stout fingers move on autopilot, peeling and dicing in just a couple of quick gestures.

Marc yanks the long perforated stretch of orders from the printer and holds it in the air, his arm outstretched at shoulder height. “Look at this, Oaxaco! It’s taller than you.” Oaxaco looks at the slim ribbon of paper, and ashes his crooked smile. “But it’s way skinnier!”

The cooks laugh and Marc begins to call the tickets to them in breakneck Spanglish.

“Fire dos gambas!” Fire datiles, cuatro piezas!” “Tres albondigas!” “Fire tres espinacas, one no garlic!” One by one, cooks yell “Oido!”—signaling to Chef that they heard the orders. Pots clank. Oven doors slam. Within minutes, the grill is full, covered with fresh squid, juicy lamb skewers, hanger steak and Ibérico pork. Flashes of re-dance over the sautée station as brandy burns o the garlicky ajillo shrimp. Basketfuls of patatas bravas and croquetas are shocked to a crackle as they hit the deep fryer. The cooks scramble to toss, dress, season, and sear, all while holding a complex puzzle of orders and cooking times in their heads.

Cooks, tongs, and plates shift and spin past each other until that old butcher block fills with the finished tapas. Marc turns toward the server station.
“Runner, please!!!”

The dining room staff rush in and Marc crosses dishes off the tickets as he directs.

“Gambas table 13 and 36.” “Four piece dates, 108.” “Espinacas, 40.” Servers grab the plates and run them into the packed dining room, holding them high in the air where they hold altitude next to the hanging Edison bulbs before landing in front of hungry guests.

Yann, the owner, stops in front of the small coat closet wedged between the bar and the dining area and watches the action.

There’s a first date on table 35 that looks like it’s going well, and one on 12 that doesn’t. A group of co-workers on 31 just broke out into hearty laughter, and the two enviably stylish older women at the next table look on in amusement. A bartender shakes a cocktail while recounting a Barça soccer match to the regulars in front of him. They scrape up the last savory bits of rice from a paella pan and bang the spoon against their plates to loosen the sticky caramelized grains.

Yann cracks the door of the coat closet and reaches in, keeping his eyes and ears fixed on the room. He brushes the wall gently until he finds the dimmers and the volume control. The nightly party is on. It’s time to dim the lights and turn up the music. This is the energy that he had seen so many times in his favorite spots in Barcelona and wanted to capture when he first envisioned Boqueria.

Much like New York, Barcelona is an eccentrically cosmopolitan city with a distinctive character.

Its long history as a magnet for pioneers of design and cuisine expresses itself today in the effortless style of its citizens as they ramble down the wide promenades, passing the fairytale façades of Gaudí’s masterpieces before settling into the cafés and tapas bars that anchor every neighborhood street.

These neighborhood spots are at once charged with history and charging ahead.

They are lively places where neighbors and friends come together to break bread and have a couple of short glasses of ice-cold draft beer. Bartenders smile and customers shout orders over an awe-inspiring and meticulously prepared variety of tapas. Plates of just-fried golden croquettes let o steam while mounds of mushrooms wait to be sautéed. Platters filled to over owing with every imaginable combination of salads, pâtés, vegetables, and seafood paint the bar with tempting bursts of edible color.

There is something about eating this way—sharing a variety of delicious dishes and drinks with friends—that provokes conversation. “I’ll fight you for that last squid!” “Mind if I soak up the sauce?” “Wow! What’s in that?”

Talk of food inevitably turns to other topics.

It is a time-honored, informal, and genuine way to connect: the original social network. That’s why we always have to turn up the music a little throughout the evening, to compete with the animated conversations.

By sharing our recipes and stories with you here, we hope to give you everything you need to bring the Boqueria experience to life in your own home. Although you may never peel a potato as quickly as Oaxaco, Chef Marc has adapted our favorite dishes to be prepared with ease in your kitchen. Our recipes are as fun to shop for and to cook as they are to eat.

We want to share that joy with you and your guests.