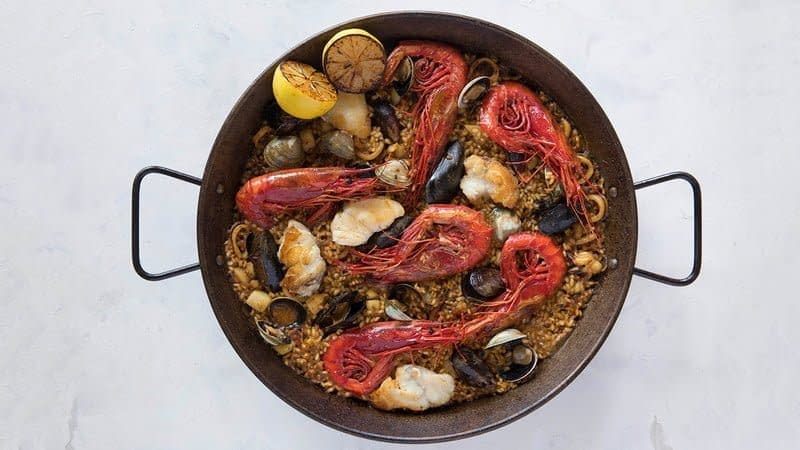 A communal dish perfect for sharing at family gatherings is one of our favorite holiday dishes, especially when loaded with succulent head-on shrimp and a variety of briny shellfish.

Bring the lobster stock to a boil in a large saucepan. Reduce the heat to keep warm until ready to use.

Heat 2 tablespoons oil in a 16-inch paella pan over high heat. Season the monkfish and shrimp with salt and pepper and put in the hot oil in a single layer. Cook until well seared and browned, turning once about 3 minutes. Transfer to a plate.

Heat another 2 tablespoons of oil in the pan. Add the cuttlefish and squid to the hot pan in a single layer, season with salt, and stir well. If the pan is dry, add another tablespoon oil. Cook, stirring occasionally, until nicely seared, browned, and popping about 5 minutes.

Add the sofrito and cook, stirring, then reduce the heat to low and stir in the picada. Add the hot lobster stock and raise the heat to high. Bring to a boil and season to taste with salt. Sprinkle the rice evenly in the pan. Stir it a little to make sure it’s evenly distributed and submerged in the liquid, but then don’t touch it again. You don’t want to activate the starches and make the mixture creamy like a risotto. You want the grains to cook separately from each other.

Bring to a boil over high heat and boil vigorously for 5 minutes. Reduce the heat to low and simmer until the rice is al dente, about 10 minutes.

Tuck the mussels, clams, shrimp, and fish into the rice, evenly spacing them around the pan. Drizzle the remaining tablespoon oil over the rice and raise the heat to high. Cook until the mussels and clams open (discarding any that don’t), all of the liquid evaporates, and the rice forms the socarrat crust on the bottom of the pan, about 5 minutes. Remove from the heat and cover with a clean kitchen towel. Let rest for about 5 minutes. Uncover and serve directly from the pan. 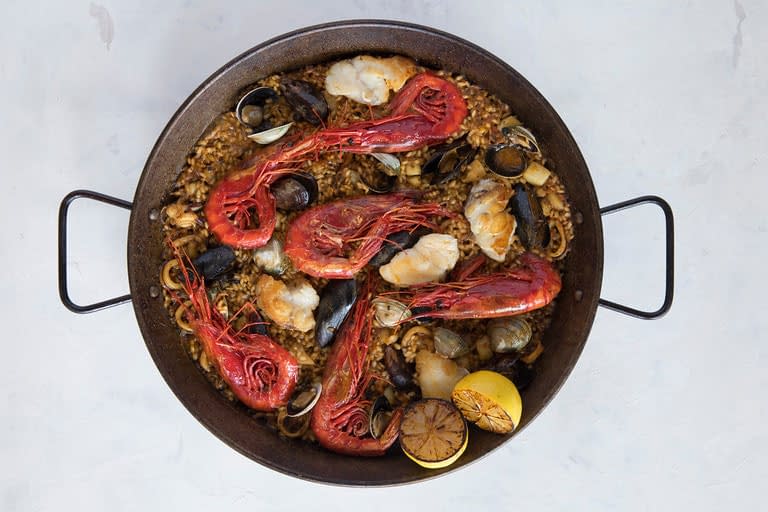 We use cookies to ensure that we give you the best experience on our website. If you continue to use this site we will assume that you are happy with it.OkDecline