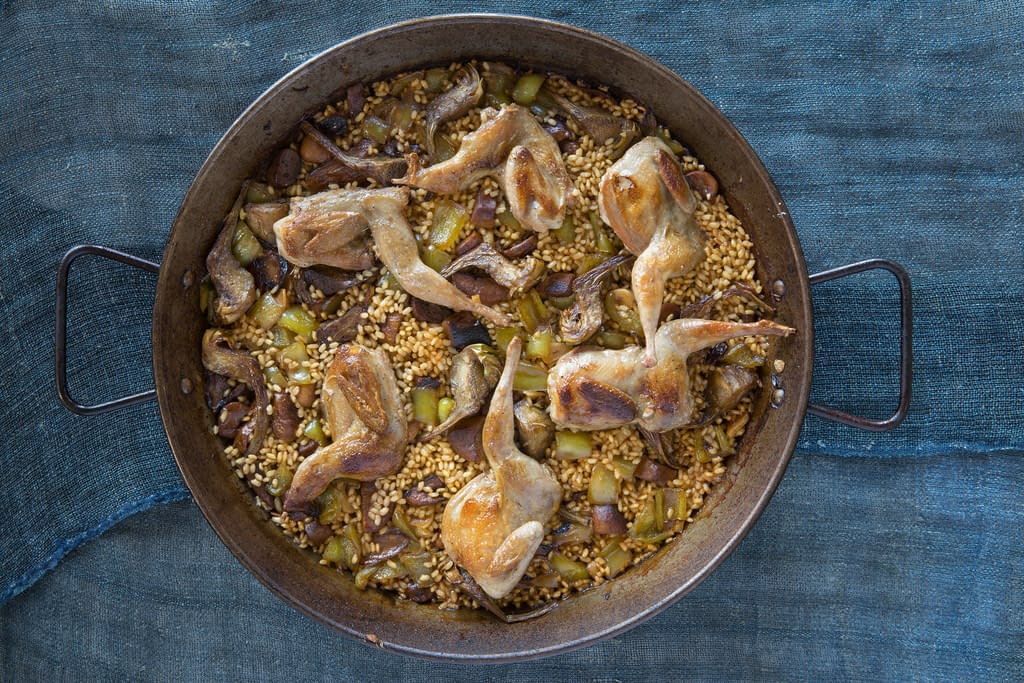 This is our favorite winter paella. We love the creaminess of the rice against the umami of porcini mushrooms, the gaminess of quail, and the fresh bite of artichokes and peppers. Marc created this dish from his memories of cooking at Can Jubany restaurant. West of the Mediterranean and south of the Pyrennes, Can Jabuny sits on the plains of the tiny town of Vic. Chef Jubany likes to put the surrounding fields on the plate, which means lots of wild game, foraged mushrooms, and homegrown vegetables. This paella sums up that delicious philosophy.

Bring the chicken stock to a boil in a large saucepan. Reduce the heat to keep just warm until ready to use.

Heat 2 tablespoons oil in a 16-inch paella pan over high heat. Season the quail with salt and pepper and put in the hot oil, skin side down, in a single layer. Cook until the skin is browned, about 3 minutes. Flip each piece and cook until the meat is lightly browned about 2 minutes. Transfer to a plate.

Add the artichokes to the hot pan in a single layer, season with salt, and stir well. If the pan is dry, add another tablespoon oil. Reduce the heat to medium and cook, turning the artichokes occasionally, until caramelized, about 8 minutes. Transfer to the plate with the quail.

Add 1 tablespoon oil to the pan and add the porcini. Season with salt, raise the heat to high, and cook, stirring occasionally, until dark brown and caramelized about 4 minutes. Push the porcini to one side of the pan and add the garlic and peppers to the other side. Season with salt, reduce the heat to medium and cook, stirring the vegetables and shaking the pan until lightly browned and crisp-tender, about 3 minutes.

Return the quail legs and artichokes to the pan, along with any accumulated juices. Stir well, then add the hot chicken stock. Bring to a boil and season to taste with salt. Sprinkle the rice evenly in the pan. Stir it a little to make sure it’s evenly distributed and submerged in the liquid, but then don’t touch it again. You don’t want to activate the starches and make the mixture creamy like a risotto. You want the grains to cook separately from each other.

Bring to a boil over high heat and boil vigorously for 5 minutes. Reduce the heat to low and tuck the quail breasts into the mixture, evenly spacing them around the pan.

Simmer until the rice is al dente, about 10 minutes. Drizzle the remaining tablespoon oil over the rice and raise the heat to high. Cook until all of the liquid has evaporated and the rice forms the soccarat crust on the bottom of the pan, about 5 minutes. Remove from the heat and cover with a clean kitchen towel. Let rest for about 5 minutes. Uncover and serve directly from the pan.